The Science Unbound Foundation has announced its 2010 award winners for best scientific papers by young investigators at the University of Alabama at Birmingham (UAB) and the New York Obesity Research Center at Columbia University College of Physicians and Surgeons, St. Luke’s-Roosevelt Hospital Center, and Albert Einstein College of Medicine. The awards, plaque and $1,000 prize are for works published in 2009 in the areas of obesity, nutrition and statistical science. 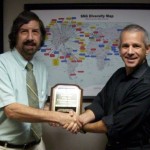 Alfred A. Bartolucci, Ph.D., professor in the UAB Department of Biostatistics, was awarded best paper by a UAB-based investigator in the area of general statistics. His paper, “An examination of Bayesian statistical approaches to modeling change in cognitive decline in an Alzheimer’s disease population”, published in the November 2009 issue of Mathematics and Computers in Simulation,http://dx.doi.org/10.1016/j.matcom.2009.09.002. 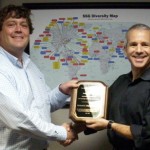 Richard Reynolds, Ph.D., postdoctoral fellow in the UAB Department of Biostatistics, was awarded best paper by UAB-based investigator in the area of statistical genetics. His paper, “The distribution and hypothesis testing of eigenvalues from the canonical analysis of the gama matrix of quadratic and correlational selection gradients” was published online in the October 2009 issue of Evolution, The International Journal of Organic Evolution,http://dx.doi.org/10.1111/j.1558-5646.2009.00874.x.

Luke E. Stoeckel, Ph.D., former UAB student and current postdoctoral fellow at Harvard, was awarded best paper by UAB-based investigator in the area of obesity or nutrition. His paper, “Effective connectivity of a reward network in obese women” was published online in the May 2009 issue of Brain Research Bulletin, http://dx.doi.org/10.1016/j.brainresbull.2009.05.016.