The Science Unbound Foundation has announced its 2009 award winners for best scientific papers by young investigators at the University of Alabama at Birmingham (UAB) and the New York Obesity Research Center at Columbia University College of Physicians and Surgeons, St. Luke’s-Roosevelt Hospital Center, and Albert Einstein College of Medicine. The awards, plaque and $1,000 prize are for works published in 2008 in the areas of obesity, nutrition and statistical science.

Ayanbola O Ayanlowo, Ph.D., former student and now at Bristol-Myers Squibb, was awarded best paper by a UAB-based investigator in the area of general statistics. Her paper, “A two stage conditional power adaptive design adjusting for treatment by covariate interaction”, was published in the May 2008 issue of Contemporary Clinical Trials, http://dx.doi.org/10.1016/j.cct.2007.10.003. 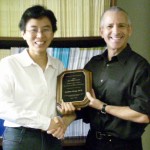 Guolian Kang, Ph.D., postdoctoral fellow in the UAB Department of Biostatistics, was awarded best paper by UAB-based investigator in the area of statistical genetics. Her paper, “An entropy-based approach for testing genetic epistasis underlying complex diseases” was published online in the January 2008 issue of The Journal of Theoretical Biology, http://dx.doi.org/10.1016/j.jtbi.2007.10.001. 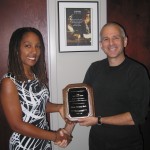 Olivia Thomas, Ph.D., assistant professor in the Department of Epidemiology, was awarded best paper by UAB-based investigator in the area of obesity or nutrition. Her paper, “Industry funding and the reporting quality of large long-term weight loss trials” was published in the August 2008 issue of International Journal of Obesity (London), http://dx.doi.org/10.1038/ijo.2008.137.

Blandine Laferrère, M.D., assistant professor of medicine at Columbia University College of Physicians and Surgeons, was awarded best paper on obesity-related research by an investigator affiliated with the New York Obesity Research Center. Her paper, “Effect of Weight Loss by Gastric Bypass Surgery Versus Hypocaloric Diet on Glucose and Incretin Levels in Patients with Type 2 Diabetes” was published online in the April 2008 issue of Endocrine Care,http://dx.doi.org/10.1210/jc.2007-2851.