The Science Unbound Foundation has announced its 2006 award winners for best scientific papers by young investigators at the University of Alabama at Birmingham (UAB), St. Luke’s-Roosevelt Hospital and Columbia University in New York. The awards, plaque and $1,000 prize are for works published in 2005 in the areas of obesity, nutrition and statistical science. 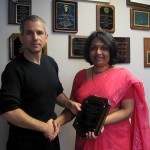 Sreelatha Meleth, Ph.D., research assistant professor of medicine at UAB, was awarded best paper by a UAB-based investigator in the area of general statistics. Her paper, “The case for well-conducted experiments to validate statistical protocols for 2D gels: different pre-processing = different lists of significant proteins” was published online in February 2005 of BMC Biotechnology. 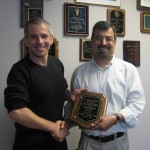 Hemant K. Tiwari, Ph.D., UAB associate professor of biostatistics, was awarded best paper by a UAB-based investigator in the area of statistical genetics. His paper, “New Joint Covariance- and Marginal-Based Tests for Association and Linkage for Quantitative Traits for Random and Non-Random Sampling” was published in the January 2005 issue of Genetic Epidemiology.

Mary M. Boggiano, Ph.D., UAB associate professor of psychology, and Paula Chandler-Laney, Ph.D., postdoctoral fellow in the UAB Department of Nutrition Sciences, were jointly awarded best paper by a UAB-based investigator in the area of obesity or nutrition. Their paper “Feeding response to melanocortin agonist predicts preference for and obesity from a high-fat diet” was published in the April 2005 issue of Psychology & Behavior.

Joseph R. Vasselli, Ph.D., associate research scientist at Columbia University and St. Luke’s Roosevelt Hospital Center, was awarded best paper on obesity-related research by an investigator affiliated with the New York Obesity Research Center. His paper “Acute insulin-induced elevations of circulating leptin and feeding inhibition in lean but not obese rats” was published in the March 2005 issue of American Journal of Physiology.