The Science Unbound Foundation, a newly formed not-for-profit foundation, has announced its 2004 award winners for best scientific papers by young investigators at the University of Alabama at Birmingham (UAB), St. Luke’s-Roosevelt Hospital in New York, and Columbia University in New York, for works published in 2003 in the areas obesity, nutrition and statistical science. Award winners received a plaque and a $1,000 prize.

Christopher Coffey, Ph.D., assistant professor of biostatistics at UAB, was awarded Best Paper by a UAB Based Investigator in the Area of General Statistics. His paper, “Properties of Internal Pilots With the Univariate Approach to Repeated Measures,” was published in the July 2003 issue of Statistics in Medicine.

Nengjun Yi, Ph.D., assistant professor of biostatistics at UAB, was awarded Best Paper by a UAB Based Investigator in the Area of Statistical Genetics. His paper, “Bayesian Model Choice and Search Strategies for Mapping Interacting Quantitative Trait Loci,” was published in the October 2003 issue of Genetics.

Ying-Kui Yang, Ph.D., research assistant professor of surgery with the Division of Pediatric Surgery at UAB, was awarded Best Paper by a UAB Based Investigator in the Area of Obesity or Nutrition. His paper, “Molecular Determination of Agouti-Related Protein Binding to Human Melanocortin-4 Receptor,” was published in the July 2003 issue of Molecular Pharmacology. 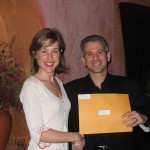 Marie-Pierre St-Onge, Ph.D., instructor of medicine at Columbia University, was awarded Best Paper on Obesity-Related Research by an Investigator Affiliated with the New York Obesity Research Center. Her paper, “Medium-Chain Triglycerides Increase Energy Expenditure and Decrease Adiposity in Overweight Men,” was published in the March 2003 issue of Obesity Research.

The institutions named in the awards were selected on the basis of their demonstrated strength to promote careers of young investigators in the areas of obesity, nutrition and statistical science.